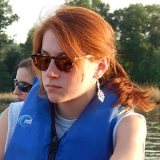 Cyanobacterial-derived dissolved organic matter (DOM) was analyzed using excitation emission matrix (EEM) fluorescence spectroscopy and the statistical Parallel Factor Analysis (PARAFAC) technique. The samples were exposed to simulated sunlight, which matches closely the solar spectrum, for a total of 20 hours while recording EEMs every twenty minutes to observe the photodegradation of the fluorescent DOM (FDOM). PARAFAC analysis was applied to deconvolute the EEM matrices into six separate components. The photodegradation kinetics was then calculated for each component and compared with previously obtained photodegradation data of marine and terrestrial FDOM. This 6 component PARAFAC model was similar to those generated from open ocean data and global DOM data sets. Regions previously considered “humic-like” FDOM showed similar fluorescence intensities and percent fluorescence loss when compared to marine DOM. However, the degradation kinetics of the “humic-like” and photo-labile component of bacterial-derived DOM was faster than that of terrestrial-derived DOM. This indicates significant differences in chemical composition. While it was previously believed the majority of marine FDOM was of terrestrial origin, marine FDOM samples showed degradation kinetics more similar to the bacterial derived FDOM.  This supported the hypothesis that a significant portion of marine FDOM is produced in situ.