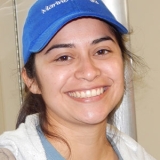 Mixotrophic plankton are capable of obtaining their energy through photosynthesis and phagocytosis, and have been observed to be common among marine and freshwater dinoflagellates. The role of mixotrophic dinoflagellates in the ‘microbial loop’ has received little attention.  Organisms that were only thought to introduce new carbon into the loop through photosynthesis may also consume fixed carbon by ingesting bacteria, making the ‘microbial loop’ more complex that originally conceived. The nanodinoflagellate Heterocapsa rotundata was cultured under various light and nutrient regimes to investigate the role of phototrophy and phagotrophy during winter conditions in the Chesapeake Bay. We quantified grazing rates of H. rotundata on bacteria using two feeding methods, ingestion of polycarbonate microspheres and prey removal experiments. Ingestion of fluorescent microspheres by H. rotundata revealed their ability to phagocytize particles. Using flow cytometry we calculated grazing rates of H. rotundata on bacteria under various light intensities and ammonium concentrations and found that H. rotundata increased phagotrophy at lower light intensities and ammonium was positively correlated with the grazing rates of H. rotundata. We conclude that H. rotundata uses mixotrophy as a primary source for obtaining carbon during the winter when there is limited light and low temperatures.

Millette, N., J. Pierson, A. Aceves*, and D. Stoecker. 2016. Mixotrophy in Heterocapsa rotundata : A mechanism for dominating the winter phytoplankton . Limnology and Oceanography 62:836-845 .