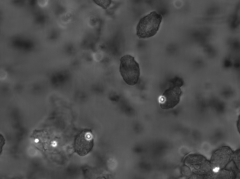 This summer, I was presented with the unique opportunity to participate in the Maryland Sea Grant Research Experiences for Undergraduates (REU) program. My experiences in this program – going on a research cruise, canoeing the Patuxent River, and visiting the Smithsonian National Museum of Natural History – were incredible. As a California native, I did not predict that under any circumstances would I be traveling to the East Coast to study marine science, and I am beyond content with such a rewarding opportunity.

The Maryland Sea Grant REU is a 12-week program, most of which we spent doing our research projects, interspersed with other activities throughout the summer. After the third week, the REU fellows were required to submit a research proposal that described our research project, how we were going to do it, and why it was important. During the seventh week of the program, all REU Fellows presented mid-summer talks, and at the end of the program we all delivered our results and conclusions.

Before starting my project, I had the foundational knowledge of any person who has ever heard about phytoplankton – they are microscopic organisms that perform photosynthesis in the water (just like land plants!). After delivering my mid-summer talk, I developed an interest in researching plankton and learned to appreciate their ecological roles.

Under the mentorship of Dr. James Pierson and graduate student Nicole Millette at Horn Point Laboratory, I studied mixotrophy (the ability of an organism to perform photosynthesis and consume prey simultaneously) in a species called Heterocapsa rotundata. This species is a type of phytoplankton called dinoflagellates. Dinoflagellates are ubiquitous, and an algal bloom of dinoflagellates can cause red tides. Heterocapsa rotundata is common in the Chesapeake Bay, where it blooms (expands in population) during winter. Understanding what and how H. rotundata eat, and under what conditions, is important because, among other reasons, this species is part of a food web that supports striped bass larvae, a prized game fish in the Bay.

Scientists have discovered that some dinoflagellate species can survive by performing both photosynthesis and phagocytosis, or ingesting prey when light and nutrient conditions are unfavorable for photosynthesis — such as during the winter when H. rotundata are most abundant. In our research project, we wanted to find out if H. rotundata was one of those mixotrophic species.

It didn’t matter that my summertime research project was focused on a winter-blooming species: We are able to study H. rotundata during the summer (and anytime) because it can be grown under varying, controlled conditions in a laboratory.

In a separate experiment we studied how environmental conditions affected how quickly H. rotundata gobbled up bacteria. We altered light and ammonium concentration; we measured the grazing rate using flow cytometry, a method that relies on lasers for computing bacterial counts. As light and ammonium decreased, we observed an increase in grazing rates. This is an exceedingly awesome finding because it supports the concept that during the winter, when light is limited, H. rotundata doesn’t need to use photosynthesis for energy. They can feed on bacteria instead. (Yummy!)

This research is important because there is little research on winter phytoplankton production. Scientists have assumed that winter conditions (cold temperatures and limited light) are unfavorable for phytoplankton growth. Our research this summer was the first step to understanding mixotrophy in cultured H. rotundata. The next step would be to conduct field studies of H. rotundata from the Chesapeake Bay to better understand what’s going on in the food web in the wild.

I would like to thank the Maryland Sea Grant REU program for providing me with a once-in-a-lifetime opportunity and my mentors Dr. James Pierson and Nicole Millette for their wisdom on phytoplankton. For my fellow alumni REUs: We had some great adventures, and I am happy to call you all my friends, colleagues and family.

See all posts to the Fellowship Experiences blog.

Learn more about this student: http://www.mdsg.umd.edu/reu/students/alison-aceves-california-state-university-…