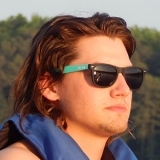 The eastern oyster (Crassostrea virginica) is ecologically and economically important to the Chesapeake Bay, Maryland, USA. Its population, however, is currently estimated to be less than one percent of what it was historically. To restore oyster populations, techniques such as larval transport modeling are being implemented to aid the selection of sanctuary locations. These models can incorporate biological factors such as salinity-induced mortality, but no data from low-salinity areas such as the oligohaline Choptank River, a major focus of oyster restoration efforts, exist. The purpose of our study was to generate salinity-induced mortality data for oyster larvae from the Choptank River and compare their tolerances to those of oysters from different salinity regimes. We performed three experiments looking at the effect of salinities from 3 to 26 on the survival of larvae from ~4 to 48 hrs post-fertilization. While overall survival differed across experiments, we found a consistent minimum survival threshold between 5-7 and peak survival window between 9-16. These salinity values were about 7 lower than those of oysters from the polyhaline Long Island Sound (threshold: 12.5-15; peak: 17.5-27). This research has direct application to oyster restoration in the Choptank River and similar low-salinity areas by improving larval transport model predictions.