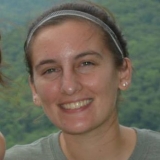 Organic ligands, which help micro-organisms obtain metals necessary for growth, remain largely unidentified in the ocean. Desferrioxamine B (DFOB) is a terrestrial, commercially available siderophore model for metal-ligand complexation in seawater. Calcium (Ca) and magnesium (Mg) are the only major cations in seawater that have a 2+ charge, allowing them to bind weakly to DFOB. However, they are in much greater abundance than trace metals in the ocean and may thus compete for complexation. DFOB has three stability constants (β) corresponding to its three hydroxamate groups. Previous regression models of DFOB titrations included β4, yet we omitted this parameter since most trace metals lack affinity for the terminal amine group. We measured DFOB complexation with Mg and Ca at various metal:ligand ratios in 0.7 M NaClO4 to simulate seawater conditions. DFOB is shipped with a mesylate (MSA) counter-ion, so MSA complexation with Mg and Ca also had to be considered. The three stability constants were used to re-evaluate the side-reaction coefficient (SRC) of DFOB in seawater. If, after proper correction for the SRC, stability constants of metal-DFOB complexes in seawater agree with those measured for unknown organic ligands, the latter may be siderophore-like.