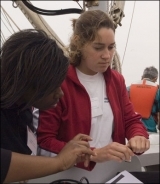 The release of phosphate from Corsica river sediments is influenced by benthic organisms and redox status, specifically iron and sulfur biogeochemistry. Sediment-water column exchanges are less in 2006 than in 2001 at certain sites of the Corsica River though phosphate continues to flux out of the sediments. Differences in exchange data between sites may be influenced by variations in pH. History of the Corsica River includes periods of nutrient loading, and long core data suggests retention of phosphorus in these sediments. Iron oxyhydroxides and pyrite formation largely control retention of phosphorus in sediments.