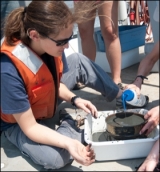 Water quality in Maryland's coastal bays has been declining in recent years with high nutrients and human and animal waste contaminants contributing greatly to the problem. 'Hotspots' for such anthropogenic inputs have been identified and include Johnson Bay; however, land use surrounding the bay offers little explanation as to why water quality is worsening so rapidly in the area. This study seeks to better understand regional anomalies through the enumeration of total bacteria, virus like particles (VLPs), and fecal bacteria at sites along four Johnson Bay tributaries, selected along a known eutrophication and land use gradient. This is the first study to assess such abundances within these creek ecosystems. Total bacterial abundances (0.49-2.83x107 ml-1) were slightly higher than those found within the Johnson Bay in 2007 but VLP abundances (0.23-3.34x108 ml-1) were more similar. Fecal bacterial abundances were found in excess of EPA primary contact standards at the majority of the sampling sites. Bacterial and VLP abundances differed at localized spatial and temporal scales which, together with high fecal bacterial contamination and high nutrient loadings, suggest that anthropogenic point-source inputs are prevalent. Changes in bacterial abundance following a rainfall event may suggest the presence of non point-source inputs. Fecal bacteria were found to be better spatial indicators of contamination than total bacteria or VLPs. These findings represent an important baseline from which to continue studying the specific types, locations, and ecosystem effects of inputs in the Johnson Bay area and may have implications for watershed land use management.