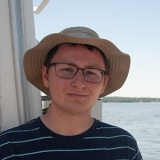 In the United States, oysters are induced to settle using either whole oyster shells or ground oyster shells (“cultch”). Settlement on cultch is used in aquaculture to provide single oysters for market. However, a common method used in European countries is to induce settlement using the hormone epinephrine. This study compared the settlement success of triploid Crassostrea virginica larvae of the Lola strain using cultch versus epinephrine as an inducer of metamorphosis and settlement in oysters. Specifically, the study was concerned with how epinephrine affected settlement success, as well and the short- and long-term growth of the oysters. To determine these effects, the larvae were raised for 8–13 days in a downwelling system, then the resulting spat raised for several weeks in an upwelling system. An additional treatment was also employed—the effects of using ambient, unfiltered water from the Patuxent River versus water filtered using a 5µm mesh screenduring the settlement and metamorphosis phases of the oysters’ life cycle. The effects of these treatments were examined in conjunction with the effects of the two inducers used to mimic a “good” versus a “poor” environmental condition (i.e. high and low food availability). In both treatments, exposure to epinephrine led to higher settlement success than cultch. Mortality was lower for the epinephrine-treated oysters than cultch, and growth in the first 8 days was similar for epinephrine and cultch oysters in the ambient treatment, but higher for the epinephrine oysters in the filtered treatment. Long-term growth was similar among all treatments and inducers. The filtered treatment led to lower settlement success and higher mortality than the ambient treatment in the first 8 days.