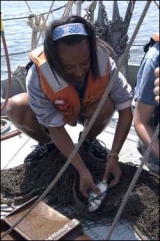 The Effects of Temperature on Scyphomedusan Chrysaora quinquecirrha Swimming and Mortality

Currently, the fate of medusa biomass after annual crashes of Chrysaora quinquecirrha populations in the Chesapeake Bay is unknown. A preliminary study on the effects of temperature on the swimming ability and mortality of the species is the first step toward understanding the eventual fate of this biomass. Such a study first requires the development of a large-tank experimental method. Our exploration in methodology to complete this study resulted in several readjustments in lighting and water exchange within the tanks. The start of the study was slowed by the local C. quinquecirrha population being low and consistently too small to sample. We speculate that this low population was caused by low salinities and thereby low strobilation rates in early summer. The following is a report on challenges faced when trying to run a large tank study on these gelatinous zooplankton once they were high enough in occurrence to sample.