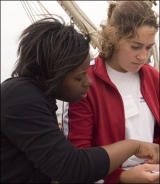 Nitrogen is considered to be key in limiting growth and productivity. The involvement of nitrogen fixation by planktonic cyanobacteria and epiphytic cyanobacteria was investigated in association with several bay macrophytes with surrounding sediments and pelagic waters. Nitrogen fixation was measured by assessing the activity of the nitrogenase enzyme complex using the acetylene reduction assay by epiphytes on the blades, roots, and rhizomes of macrophytes including Myriophyllum spicatum, Potamogeton perfoliatus, Zostera marina, Ruppia maritime, Vallisneria americana, and Stuckenia pectinata. Rates of nitrogenase activity in the pelagic realm overall were lowest at a range of 0.044-11.4 nmol C2H4/g/h however, the highest rate was displayed in the cyanobacteria bloom at 629,000 nmol C2H4/g/h. Sediment seemed not to have high rates of nitrogenase activity ranging from 0.155-8.57 nmol C2H4/g/h and revealed no strong correlation to the organic content at R2 = 0.0117 nmol C2H4/g/h. Seagrass blades, Zostera marina and Stuckenia pectinata yielded higher rates of nitrogenase activity at 544 and 204 nmol C2H4/g/h respectively. Overall nitrogen fixation was relatively higher in marine systems where nitrogen is limited and lower in fresher environments systems where nitrogen is sufficient and ultimately may be a source of "new" nitrogen.