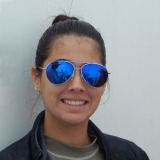 Coastal lagoons are characterized as shallow water bodies that are separated from the ocean by barriers. Differences in the quality of the nutrient pool, and the resident phytoplankton community can lead to different types of algal blooms in coastal lagoons. An experiment was conducted to quantify the effect of different types of nutrient enrichments on the phytoplankton community in temperate lagoons. Ten liters cubitainers containing water from Maryland/Virginia Costal Bays were exposed to six nutrient treatments and a control. Experimental cubitainers were enriched with different nitrogen forms and N:P ratios, as follows: ammonium (NH4+) 16µM; nitrate (NO3-) 16µM; dissolved organic nitrogen (DON) 16µM; ammonium 16µM + phosphate (PO43-) 1µM; nitrate 16µM + phosphate 1µM; and dissolved organic nitrogen 16µM + phosphate 1µM. All cubitainers were incubated in the field for 48 hours. This experiment was conducted twice during the summer of 2014. Results demonstrated there were no significant increases in any of the phytoplanktonic communities, however minor increases in these communities were possible to observe. The nano-plankton community dominated when exposed to ammonium and ammonium + phosphate, while prokaryotes only increased when exposed to ammonium. Pico-eukaryotes did not show any dominance in any treatments. Results suggested that responses of phytoplankton community from enrichment in lagoon ecosystems are diverse.