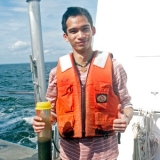 The Macando oil spill three years ago released an unprecedented amount of oil into the Gulf of Mexico. The environmental impacts of this massive influx oil are still being studied today. This project focuses on the effects oil has on microbes in deep-sea anoxic sediments. In the anoxic sediments, three major microbial zones exist due to competitive-substrates. The primary microbes studied within each of the three zones respectively are the sulfate reducing bacteria, the methanotrophs, and the methanogens. In this experiment, incubations were done to produce a time series for each zone tracking the changes in concentration of sulfate and methane. It was hypothesized that the addition of oil will cause sulfate to be depleted faster in the sulfate reduction zone and methane to be produced sooner in the methane production zone. The results showed that sulfate remained constant throughout the time series despite oil being added, and that methane was produced sooner for the oil groups than the control groups in two of the three zones. These results contradicted the idea of competitive substrates. In conclusion, a new hypothesis was formed stating that the addition of oil has a greater effect on methane production via non-competitive substrates.

Geronimo, G.*, and L. Lapham. 2014. The microbial effects of the addition of oil to anoxic sediments from the Chesapeake Bay. Ocean Sciences Meeting, Honolulu, Hawaii.