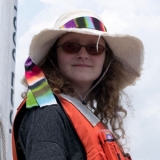 We quantified the potential impacts Eurytemora carolleeae nauplii have on winter Heterocapsa rotundata abundances and added to our understanding of how different concentrations of H. rotundata impact the survival of E. carolleeae nauplii. Both H. rotundata winter blooms and E. carolleeae nauplii are poorly understood due to being understudied. We conducted grazing and survival experiments to determine ingestion, clearance, and mortality rates of nauplii according to varying concentrations of H. rotundata. We found the functional response of the nauplii to be Holling type II response with a maximum ingestion (Imax) of 0.2 μg copepod-1 day-1 and half saturation constant (K) of 245.2 μg C L-1. Any increase in H. rotundata concentration resulted in increased survivability of nauplii compared to when no food was present. As H. rotundata concentrations increased, the number of nauplii supported and the total amount of carbon removed increased but the percent of the total carbon concentration removed decreased. Nauplii in a supported population can theoretically remove on average 11% of the H. rotundata standing stock. Nauplii in a stable population do not seem capable of depleting their food supply. This has important implications for striped bass larvae that feed on E. carolleeae copepodites in the spring.

Millette, N.C., G.E. King*, and J.J. Pierson. 2015. A note on the survival and feeding of copepod nauplii (Eurytemora carolleeae) on the dinoflagellate Heterocapsa rotundata. Journal of Plankton Research 37:1095-1099.