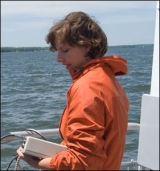 Factors Affecting Cyanobacterial Nitrogen-Fixation on the Sassafras River, a Tributary of the Chesapeake Bay

Summer nitrogen limitation in the Sassafras River, a freshwater Chesapeake Bay tributary, selects for N2-fixing cyanobacteria that could provide a "new" nitrogen source to this already nutrient enriched system. Despite the prevalence of these diazotrophic (N2-fixing) blooms, little attention has been focused on the role of N2-fixation in nutrient enriched, eutrophic estuaries like the Chesapeake Bay, nor has the role of cyanobacterial N-fixation been considered in N budgets. We analyzed weekly water samples from four stations for total suspended solids (TSS), volatile suspended solids (VSS), chlorophyll a, dissolved nutrients, and nitrogenase activity via the acetylene reduction assay. We performed two nutrient addition bioassay trials, monitoring the same parameters with additions of phosphate (5, 10 μM) and nitrate (10, 20 μM). Despite a cool, relatively wet summer without large cyanobacterial blooms, we found N2-fixation to be present across the sample sites, with hot spots at Budd's Landing, a neighborhood marina, and Georgetown, an urban marina. Traditional water quality parameters such as suspended material and chlorophyll a were found to be poor indicators of N2-fixation. In our bioassays, we found results consistent with N-limitation. Nitrogen additions stimulated phosphate uptake without increasing levels of N2-fixation. Phosphate additions increased N2-fixation without increasing chlorophyll a.