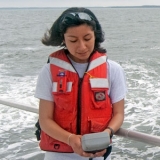 The Chesapeake Bay has experienced extensive areas of hypoxia (< 2 mg O2 L-1) in the past half-century as a direct result of eutrophication. The copepod Acartia tonsa, serves as a valuable prey item to higher trophic levels in the Chesapeake Bay and past studies have detected negative hypoxic effects on reproductive success and egg development rates. Little is known, however, on the physiological mechanism causing increased egg hatching time by hypoxia in A. tonsa. The goal of this study was to examine if lowered A. tonsa respiration rates may be a potential physiological mechanism impacted by hypoxia in the Chesapeake Bay. Egg development rates of female A. tonsa and egg hatching success were measured in hypoxic (< 2 mg O2 L-1) and fully oxygenated (> 5.99 mg O2 L-1) waters. Egg respiration rate and development were measured in two-hour intervals for a total of eight hours using a Pro2030 Professional Series YSI probe. We expected lowered respiration rate in hypoxic conditions to contribute to decreases in A. tonsa egg production, sinking rates, and ultimately egg hatching success. Results of this study may inform how future A. tonsa populations will be impacted in a changing environment and how those changes impact the future health of their predators.