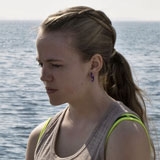 Acartia tonsa are copepods prevalent in the Chesapeake Bay and serve as a major prey component in estuarine food webs as well as aquaculture. Two genetically distinct cryptic species of A. tonsa have been identified in the Chesapeake Bay. These morphologically similar lineages, F and S lineage, appear to show preference to salinity levels with the F lineage preferring low salinities and the S lineage preferring a more saline environment. Research was conducted to determine a difference in lineage preference and tolerance to stressors of hypoxic conditions at different temperatures. Results showed A. tonsa of both lineages had a high tolerance to hypoxia at a temperature of 25°C and an increased mortality rate in a 30°C environment. Further tests and are needed to determine a significant difference in F and S lineage survivorship in the 30°C hypoxic conditions. Additionally, during the study population lineage proportions were determined from collection sites at varying salinities along the Choptank River. These F and S lineage proportions reiterated the salinity preferences of the lineages but also indicated a decrease in the prevalence of F lineage A. tonsa in the Choptank River since previous records in 2003.