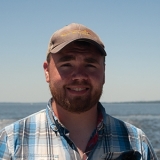 Plastic degrades overtime into smaller particles of plastic known as microplastics through a process of fragmentation. The development of microplastics has been studied in a variety of contexts, such as salt marshes and the open ocean. However, little is known about the factors that influence plastic degradation and microplastic production in coastal environments, even though the majority of the plastic that ends up in the ocean must pass through coastal environments on its way from land to ocean. To understand this process, this experiment takes the experimental design from Weinstein et al. (2016) and adapts it to coastal processes such as tides, erosion and deposition, wave action, biomass development, and other coastal factors. As a result, strips of high-density polyethylene plastic and polystyrene plastic were field deployed in a variety of locations corresponding to critical variables such as erosion, deposition, and subtidal and intertidal influences. These strips were collected at four weeks, eight weeks, sixteen weeks, and thirty-two weeks from the start of the experiment and were analyzed for mass loss, biomass development, microplastic production, and fragmentation. The experiment remains in progress, but the four-week results show the development of biofilm and no significant plastic strip mass loss, as expected. The results also show large scale macroplastic fragmentation occurring in the subtidal polystyrene strips in the erosion zone.