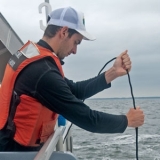 A wetland habitat at the Poplar Island ecosystem restoration project (Cell 6) has recently become home to a variety of birds, which use the pond for its nearby food and protection from predators. Additionally, a variety of cyanobacteria inhabit the site, including Anabaena, Oscillatoria, and Microcystis. Toxins produced by some of these cyanobacteria resulted in bird fatalities after a Microcystis bloom in summer 2012. Here, we examine the role that temperature, nutrients, and species composition plays in predicting how blooms might occur, whether toxins are produced, and how nitrogen fixation is performed. We found that cultures of cyanobacteria (primarily Anabaena) grow well in temperatures as high as 30°C, and that Anabaena from Cell 6 produces low levels of microcystin. Nitrogen fixation levels in cultures tended to spike periodically, possibly in response to fluctuations in limiting nutrients. Finally, nutrient concentrations played an important role in cyanobacterial growth and nitrogen fixation.