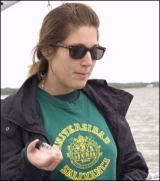 The ability of five wetland species to take up nutrients, nitrogen and phosphorus, were evaluated by examining initial and final whole plant nutrient concentration. They were grown in a 5% Hoagland's hydroponic solution. Plant samples were taken after three weeks and analyzed. The highest growth rate was seen in the species Kosteletzkya virginica. This species also exhibited the highest nitrogen tissue concentration. Panicum virgatum also exhibited the highest tissue concentration of phosphorus and second greatest nitrogen tissue concentration. The ability of these particular plants to take up large quantities of nutrients is beneficial for removal of these nutrients to alleviate pollution in and around watersheds like the Chesapeake Bay.