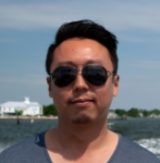 Anthropogenic CO2 emission have led to an effect known as ocean acidification. As a result, many coastal estuarine systems, such as the Chesapeake Bay, have seen major biogeochemical changes and large declines in biomass and biodiversity. Since pre-colonial times, oyster population in the Chesapeake Bay have declined by over 100-fold due to human associated activities such as over harvesting and water pollution. Oyster reefs are known to regulate carbonate system dynamics in their environments and their decline have likely led to the loss of any potential buffering capacity. This study quantified the potential pH and Ωaragonite buffering by oyster reefs in the Chesapeake Bay by running idealized simulations using the ROMS-RCA modeling system with multiple DIC/TA generated flux. Our study has found that oyster reefs have the potential to buffer ~15% of projected pH and Ω changes in their surrounding water. The effects buffered by oysters are relatively local to their environment with minimal spatial distribution. This is important as there are ongoing large-scale oyster reef restorations in the Chesapeake Bay. Our study and other future works on potential oyster reef buffering to water column carbonate system dynamics can serve as a framework to target ideal locations in the Chesapeake Bay as well as other estuarine systems for restoration and protect coastal waters from the effects of climate change.