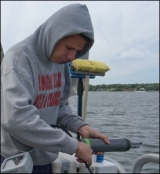 The Use of Structure by Grass Shrimp, Palaemonetes pugio, as a Refuge Against Predators

We studied the importance of benthic habitat structural complexity to grass shrimp and determined if shrimp utilized habitat of varying complexity differently in the presence and absence of predators. We constructed habitats with differing complexities using PVC tubing that were placed on a sand base (sand control and a medium and high complexity tube structure) in large laboratory tanks. Shrimp were placed in these tanks for a 34 hr period and after each trial their location was measured as being on or off the test habitat. Trials were done in the presence and absence of white perch, which is a predator of grass shrimp. We found that shrimp were only significantly attracted to the high complexity habitat, whereas in the medium complexity and sand control tanks, the shrimp moved about the habitat area. In the predator/sand control and predator/medium complexity treatments, shrimp were found to be higher in the water column. In contrast, in the predator/high complexity treatments shrimp stayed lower in the water and on the reef. However, there was no interaction between habitat complexity and the presence of predators.