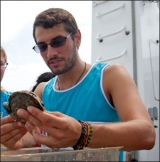 Our data have quantified and characterized the composition of sediment and water quality parameters at the Susquehanna Flats. These variables are important factors in determining the rate of growth of submersed aquatic vegetation (SAV) for a given year. This summer, the SAV has had a much weaker growth than previous years. An unusual year of weather, with heavy fall storms and warm winter temperature, appears to have contributed to lower SAV growth and abundance. During the summer of 2012, we found that there were higher concentrations of suspended solids and phytoplankton chlorophyll inside the bed and down-bay from the bed than would be expected (based on conditions measured in previous years). The suspended solids are mostly made up of inorganic materials, suggesting that input of these materials into the water column from the fall storms discharge was more important than the eutrophication effects from nutrient inputs. Elevated levels of sediment down-bay are attributed to continual resuspension and deposition of bottom sediments inside the bed. It is likely that this increase in suspended particles caused decreased water clarity which in turn caused reduced SAV growth. Biomass samples collected in this study revealed lower SAV growth associated with increased epiphyte levels. Understanding how environmental changes influence the growth and abundance of SAV can help to explain both disappearance and resurgence of SAV in the Susquehanna Flats.