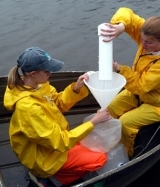 The ecological role of the eastern oyster, Crassostrea viriginica, in nitrogen cycling has provided a new outlook on the "value" of this organism within the estuarine system. It has been suggested that the oyster may play a crucial role in the removal of nitrogen by denitrification. To test this hypothesis an experiment is being conducted in La Trappe Creek, a tributary to the Choptank River, to study how oysters influence nitrogen fluxes between the sediment surface and the overlying water column. In order to make the proper attribution of fluxes to the oysters, the amount of biodeposits that accumulates at the sediment surface needs to be quantified. Using fluorescent particles as a tracer for the biodeposits, I was able to estimate this number from a percent recovery. Variation existed between the number of particles released by the individual oysters for each of the three trials and in the number of particles recovered beneath the oysters. Ultimately, there was little difference in the percent recovery of particles from the three trials; an average of 3.2% recovery was calculated.