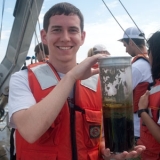 Three modern Diploria strigosa corals from Anegada, British Virgin Islands were analyzed for Sr/Ca ratios over their lifetime to create a modern calibration between Sr/Ca and sea surface temperature (SST) for use in climate reconstructions of subfossil coral specimens from the same site. Results were compared to those of Hetzinger et al. 2006 and Giry et al 2010. Average mean Sr/Ca between the three corals was 9.03 mmol/mol, yielding an expected intercoral mean Sr/Ca range in the Caribbean for this species of approximately 9.00±0.15 mmol/mol when the other studies are incorporated. The average Sr/Ca-SST relationship for the three corals using ordinary least squares regression was -0.043 mmol/mol/°C using the monthly Sr/Ca from corals and gridded temperature from the ERSST 3b data set (Smith et al. 2008), which agrees with previous findings. The average Sr/Ca-SST relationship for the three corals using reduced major axis regression was -0.0564 mmol/mol/°C, whereas the average Sr/Ca-SST relationship was -0.122 mmol/mol/°C based on the monthly anomalies of both data sets. This calibration informs further work reconstructing Medieval climate data from subfossil corals at this site.