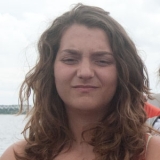 Seawater samples (200) containing dissolved organic matter (DOM), collected in the Atlantic Ocean, have been solid-phase extracted, analyzed by EEM Fluorescence Spectroscopy and used to create a robust Parallel Factor Analysis (PARAFAC) model. Using a 24 bottle rosette and CTD profiler aboard the R/V Atlantic Explorer, a total of 24 samples (10 liter volume), were collected at the Bermuda Atlantic Time Series Station (BATS) at every 200 m down to 4,530 m. Each sample was then solid-phase extracted. The quinine sulfate normalized fluorescent peaks that represent humic-like and fulvic-like peaks showed a continuous increase until constant levels were reached at about 1,400 m depth. The protein-like fluorescent peak showed exactly the opposite trend, indicating that this fluorescent component is correlated with the abundance of marine biota (autotrophic and heterotrophic organisms) as there is more marine life in the surface waters of the ocean. The source of the humic and fulvic-like fluorescence at greater depths is not yet known, but it is still plausible that it is related to heterotrophic microorganisms. Additionally, sunlight would severely photobleach these fluorescent dissolved organic matter (FDOM) components at the surface ocean and deplete them. The PARAFAC model was then applied to determine the relative contribution of the six PARAFAC components found for Atlantic solid-phase extracted marine FDOM. The components established for humic-like, fulvic-like and protein-like fluorescence followed the same trends as described above, indicating that the PARAFAC model nicely resembles the results obtained through the quinine-sulfate normalized method. These trends have also been confirmed in previous studies using direct water samples and hence the solid-phase extraction method, combined with PARAFAC analysis used in this study is suitable to obtain representative fluorescent data with the advantage of using much more concentrated samples and therefore a greatly improved signal.