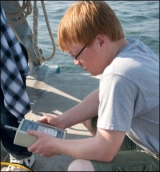 We tested the ability of Hyla versicolor (grey tree frog) to depurate Ag, Cu, Zn, As, Cd, Se, Hg, V, Cl and Pb, introduced in 2 dosing levels through food, during various stages of metamorphosis. We also looked for biological consequences or stress in individuals, by measuring the metabolic rates of individuals at various stages along with growth rates. The control, low and a high dose treatments where conducted in quadruplicate, with each enclosure having 15 animals at the beginning of the experiment. Individuals were taken from each enclosure before the onset of metamorphosis, after hind leg had emergence, after front leg emergence and after complete metamorphosis. Analysis of trace elements in tissue was performed using ICP-MS after microwave digestion. Respiratory rates of individuals were tested before metamorphosis and after metamorphosis, using a closed-circuit microrespirometer. Among the elements tested, Ni, Cu and Zn showed decreases in concentrations between the tadpole stage and premetamorphosis in low and high dose treatments, which suggests that Hyla versicolor larvae are able to depurate these metals in the early stages of metamorphosis. However, concentrations of these elements increased during the final stage of metamorphosis, indicating that element mass loss exceeded depuration.

Heyes, A., L. C. Rowe, and P. Conrad*. 2014. Differential patterns of accumulation and retention of dietary trace elements associated with coal ash during larval development and metamorphosis of an amphibian. Archives of Environmental Contamination and Toxicology 66:78-85.