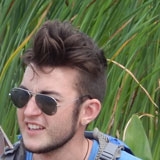 Cable bacteria, a newly discovered sulfide-oxidizing microbe, was recently identified with genetic techniques in the rhizosphere of seagrasses. These bacteria couple the reduction of oxygen in the water with the oxidation of sulfide in sediment and are believed to improve seagrass health by reducing the amount of sulfide intrusion that occurs in below-ground plant structures. Cable bacteria were extracted from sediment taken from three sites of varying salinity and dominant seagrass species within the Chesapeake Bay watershed. These bacteria were stained with a DNA probe using fluorescent in situ hybridization to determine the density of the filamentous bacteria present. Sediment was taken from three locations within each site: from root-associated sediment, bulk surface sediment within the seagrass bed, and bulk sediment collected away from the seagrasses. The bacteria were found at all sites and were present in high density within root-associated sediment, though the differences in density were not significant between sites or sediment type. The presence of these bacteria in sediment surrounding the roots of seagrasses could identify cable bacteria as an important mechanism controlling local geochemistry of seagrass beds and maintaining the health of the plants.