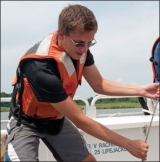 The paradox of plankton has remained an open question in oceanography since it was proposed by Hutchinson in 1961. This project explored the effects of two theories, contemporaneous disequilibrium and mixing of patchy plankton communities. A fully functioning, 3-dimensional physical model was paired with an 80 state model including 77 taxa of phytoplankton. Lagrangian particles, paired with a phytoplankton community, were run through the model under various levels of biological mixing to represent different levels of micro-scale patchiness. Surface plots and vertical profiles indicated that the model was effectively depicting real world conditions. Results showed that decreased levels of biological mixing restricted and reduced the biodiversity of a phytoplankton community. A phytoplankton community which was completely isolated and prevented from mixing yielded the lowest biodiversity among communities. This low biodiversity observed at reduced mixing rates indicates that greater biodiversity is not supported by community history during micro variations in physical and chemical properties. The increased biodiversity at moderate to high mixing indicates that mixing between patchy or semi-isolated communities increases the biodiversity of each community.