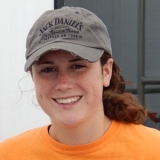 Respiration, along with photosynthesis, are the driving processes of life. Copepods, in addition to many other marine organisms, rely on diffusion across their cell membrane to obtain the required oxygen requirements of respiration to support growth and regulate metabolic functions. This diffusion rate is determined by the pressure gradient of oxygen between the organism and the dissolved oxygen in the water. Hypoxia has become increasingly prevalent in coastal waters including the Chesapeake Bay, threatening populations of the common planktonic copepod, Acartia tonsa. Although literature suggests a behavioral adaptation of adult vertical migration out of these areas, eggs commonly sink into hypoxic or anoxic zones. Therefore, it is possible that eggs and early stage nauplii are forced to maintain a minimal respiration rate in order to survive. In order to predict the population success of A. tonsa species in coastal areas, we studied the effect of environmental oxygen partial pressure on stage I-II nauplii respiration rates. Although our data does not show a significant decrease in respiration with decreasing oxygen partial pressure, it acts as a promising guideline for future studies. Using the methods discovered in this study, along with more water sterilization techniques, more reliable data can be obtained for future nauplii respiration studies.