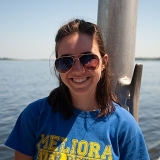 Studies have shown that thawing permafrost has the potential to release significant amounts of greenhouse gases directly to the atmosphere. Yet, some areas of the world with continuous permafrost-containing mineral soils have not been characterized and need to be constrained to gain a global picture of the potential impact of thawing permafrost on global warming. In this study we report on recent cores drilled from terrestrial permafrost, as well as permafrost underlying shallow marine waters, in Tuktoyaktuk Island, Northwest Territories, Canada. Material was subsampled from ~1m increments and measured for concentrations of dissolved methane. Methane concentrations ranged from 0.03 to 0.13 mg CH4per kg soil, with a peak in concentration at 2 m, just below the active layer. These concentrations are similar to other mineral soil permafrost cores. Material from the active layer and 2.8 m below the surface was incubated for ~6 weeks under aerobic and anaerobic conditions at -20°C, -5°C, and +15°C to quantify the amount of methane and carbon dioxide being released from microbial activity. These biotic treatments were compared to killed controls to determine if any abiotic processes may be contributing to methane and carbon dioxide release. Under anaerobic conditions, methane concentrations increased over time at all temperatures compared to the killed controls, suggesting microbial production. In addition, methane concentrations increased faster under warmer conditions, but we did measure appreciable amounts of methane in the -20°C treatment. This paper reports on both the aerobic and anaerobic incubation results within the broader context of the downcore characterization work. It will also discuss how the results fit into the larger framework of permafrost incubation experiments.