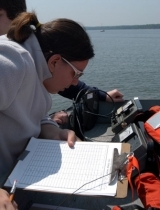 Existing video data taken with the Video In Situ Settling Tube Apparatus (VISTA) was used to calculate particle sizes and settling speeds of suspended sediment particles found within the Estuarine Turbidity Maximum (ETM) region of the Chesapeake Bay. This information was used to determine the relationship between particle size and settling speed in order to calculate the fractal dimension, D3 and the reference particle diameter, dr. Observations of the settling speeds of suspended sediments in their natural environment have been estimated at 1 mm/s with fractal dimension values between 2 and 2.5. The preliminary results of this study show that particle settling speed increases with both size and depth, ranging between 0.5 and 4.5 mm/s and with sizes ranging between 71 and 549 microns. The calculated fractal dimension values decrease with depth ranging from 1.8 to 2.4, while the calculated reference particle diameter values increase with depth ranging between 0.5 and 4.9 microns.