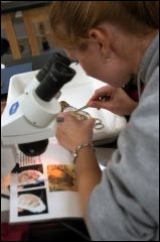 Characterization and Migratory Behavior of Microphytobenthos in the Chesapeake Bay