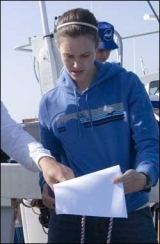 Ichthyoplankon were collected during a cruise at the mouths of Chesapeake and Delaware Bays. Larval fish from these collections were identified and their vertical distributions were mapped. The species included significant numbers of striped anchovy, bay anchovy, weakfish, Atlantic croaker, and naked goby. While Delaware Bay collections were more diverse, Chesapeake Bay had a greater abundance of larval fish overall. Larvae were found in highest concentrations close to the surface near the mouth of Chesapeake Bay but were found throughout the water column near the mouth of Delaware Bay. The differences in vertical distribution could be related to the differences in water column structure which was well mixed in the Delaware and stratified in the Chesapeake. Imaging techniques and protocols were developed during the laboratory work. The library of images of larval fish will help future researchers identify larval fish indigenous to Middle Atlantic Bight region. This research also will increase our understanding of the influence of varying environmental conditions on larval fish distribution and transport.