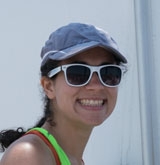 Restoration of Crassostrea virginica, the eastern oyster, has been prioritized in large part due to the many ecosystem services that oysters provide including creating habitat and increasing water clarity due to their filtration. Yet, field observations of the ecosystem effects of C. virginica filtration on water clarity are limited. This study aimed to observe and detect C. virginica filtration over a subtidal, restored oyster reef in Harris Creek, MD. To evaluate the hypotheses that suspended solids would decrease in the direction of the tide due to oyster filtration, and that sediments would coarsen increasingly in the direction of the tide due to oyster bio-deposit resuspension and filtration, water properties, and particle size distribution were measured with an Acoustic Doppler Profiler (ADP), an optical backscatter sensor (OBS), and a Laser In-Situ Scattering Transmissometer (LISST). A clear signature of filtration was observed at maximum flood tide and maximum ebb tide: the amount of suspended solids in the water measured with the OBS and the particle volume concentrations measured with the LISST decreased over the reef in the direction of the tide. Floc particles greater than 66 um were not found to increase along the reef in the direction of the tide as was hypothesized. Instead, large patches of suspended floc particles were observed throughout the sampling period, and their source has yet to be determined. Results of this study provide evidence of the effect of C. virginica filtration in the field, and provide new evidence for patches of suspended flocs whose presence could have a significant impact on oyster filtration and associated processes.