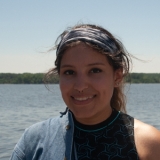 Sargassum as an Important Source of Methylmercury in Aquatic Systems

Sargassum is a pelagic macroalgae that accumulates in the warm Mid-Atlantic providing shelter, food, and a breeding ground to over 60 marine species. Sargassum can export about 43% of its production both as particulate organic carbon (POC) and dissolved organic carbon (DOC). It is also known to sequester heavy metals, such as mercury. Due to its vast coverage and high activity, Sargassum mats seem like an ideal place for production of methylmercury (MeHg), the only mercury to bioaccumulate in fish and humans. After analysis of the values of MeHg, T-Hg, and optical properties present inside and outside Sargassum mats in the Gulf Stream and in Puerto Rico, a connection between the quantity of dissolved organic matter (DOM) present and T-Hg being methylated can be made. DOM can act as a mercury carrier and is released the most when Sargassum degrades. Sargassum does contain mercury (3.92 ng/g wet wt) and methylmercury (0.011 ng g wet wt). We found that Sargassum beds release Hg (2.62 ng/L) and MeHg (1.03 ng/L) into the ocean water, concentrations much higher than the Hg (0.67 ng/L) and MeHg (0.02 ng/L) seen in the open ocean. The more DOM present correlates with the more MeHg produced. High methylation is often observed when the Sargassum is stressed, such as in coves, where microbial activity changes as DOM export from the Sargassum increases. In the waters of the Laguna Grande, Puerto Rico, a lagoon impacted by a Sargassum invasion, the input of fresh DOM from Sargassum resulted in low oxygen conditions and Hg and MeHg concentrations in waters outside Sargassum mats ranging from 0.02 to 0.7 and 0.02 to 0.4 ng/L, respectively. This suggests Sargassum can have significant local impacts on water quality. Laboratory simulations of these low oxygen conditions yielded concentrations of 6.43 ng/L T-Hg and 4.47 ng/L MeHg. Further research can be done to look at the type of bacteria responsible for methylation in Sargassum mats as well as where the MeHg attaches itself on the DOM.