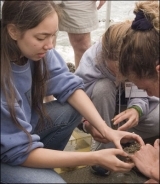 Seagrass plays an important role in its ecosystem, but it has declined in the Chesapeake Bay to as low as 10% of historic levels. Increased seston concentrations, due to eutrophication and increased sediment loads, are believed to be the main cause of the seagrass decline because seston increases light attenuation, thereby decreasing photosynthesis. Oysters reduce seston concentrations through suspension feeding, and oyster reefs and breakwaters can also decrease seston through wave attenuation. A numerical model that included seagrass, waves, oysters, light, and seston (SWOLS model) was used to determine if oyster reefs and breakwaters could improve seagrass growth by reducing suspended sediment concentrations. Seagrass growth potential was calculated using different wave heights, the presence or lack of oysters and/or breakwaters, and two configurations of oyster reefs/breakwaters. Wave height was found to be the dominant factor influencing seagrass growth potential, with higher waves predictably causing decreases in seagrass growth potential. Breakwaters were found to improve seagrass habitat quality only in the presence of the highest wave heights simulated (0.4 m). Oysters did not affect seagrass growth in any of the simulations conducted, mostly likely due to their seston-dependent filtration rates which reduced filtration to less than 20% of full capacity in low (< 5 mg l-1) and high (> 35 mg l-1) suspended sediment concentrations. A dynamic phytoplankton component and wave reflection should be incorporated into the model in order to assess the influence of oyster filtration on both the organic and inorganic components of seston, and the effect of breakwaters on seagrass growth potential in high wave conditions.