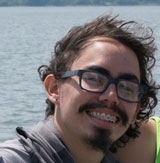 In an effort to reverse the effect of eutrophication, average nutrient inputs are being reduced in highly dynamic coastal shallow ecosystems; however, little is known about the response trajectories following these reductions. Long-term data (tide, nutrients, community respiration and hydrographic data) from the Chesapeake Biological Laboratory’s (CBL) monitoring program and a ~daily 10-day sampling, of the same measurements, were analyzed to understand the dynamics of the CBL pier ecosystem. A Water Column Model (WCM) was then constructed and coupled to an existing Sediment Flux Model (SFM) to simulate our ecosystem’s response to nutrient load reductions. A strong seasonal correlation (R2 = 0.7149) between community respiration and particulate nitrogen was observed as well as a dominance of nitrate in the early spring and a dominance of particulate nitrogen in the summer (as NO3 decreased). Daily variability for particulate nitrogen and algal N were generally low while high variability in community respiration seemed correlated with mean sea level (tide). Preliminary model runs showed significant differences in annual data and model dynamics. These results suggest that seasonal shift in the dominance of different nitrogen species reflect nitrogen inputs from the watersheds in winter-spring and accumulated algal material in the summer. Seasonal community respiration seems to be driven by the amount of organic material in the ecosystem while ~daily variability seems to be driven by the lability of the organic matter available as the tides changes. Finally, future improvements to the Shallow-Water Ecosystem Model are necessary for better simulations dynamics.