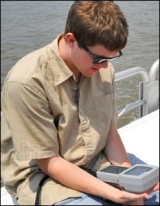 A tidally and width averaged two dimensional numerical model is used compare salinity and velocity trends in the Chesapeake and Delaware Bays. Extensive data was collected on both bays for 2009 to increase the accuracy of the model and allow for future hindcasting. The salt intrusion length, stratification, longitudinal salinity gradient, and residual velocity were determined by varying the river discharge rate and the rise in sea level. Results were compared to theoretical expectations for both bays while new salt intrusion length data was acquired for comparison in the Delaware Bay. In general, the salinity field responded less sensitively than expected while the velocity behaved greater than expected to rises in sea level but as expected to changes in river discharge rate. A comparison of time-dependent models to quasi-steady models gave corrections to stratification..