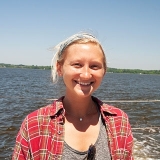 Quantifying Energetics and Scope for Growth of Different Strains of the Eastern Oyster, Crassostrea virginica

Oyster aquaculture has found success in using a variety of oyster strains which have been developed to perform in specific environmental conditions. Strains differ in areas such as disease resistance, salinity tolerance, and growth rates. Although differences in growth rates among strains has been observed, the physiological cause of the growth differences remains unknown. The goal of this study was to investigate and begin to quantify the bioenergetic budget of oysters, specifically the relationships among environmental variables, respiration rate and growth. It was predicted that the faster-growing strain would have the lowest respiration rate and therefore more energy leftover to dedicate towards growth. This study utilized microrespirometry methods using Firesting O2 fiber-optic oxygen probes to measure changes in oxygen concentration within the vials. Trials were run at various temperature and salinity combinations chosen to reflect the variation typical of the Chesapeake Bay. Changes in oxygen concentrations were converted to respiration rates and data was analyzed using response surface methodology. ANOVA results indicated that strain effects were not significant (F=1.0122). Some aspects of the results supported the hypothesis and other aspects were in conflict with the hypothesis such that an overall conclusion is not possible and more work needs to be done in order to understand the bioenergetics of oysters.