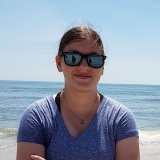 The Chesapeake Bay and its tidal tributaries experience significant bottom water hypoxia during the summer months. This study investigates the effects of a field of concrete reef balls in the Severn river, a tidal tributary of the Chesapeake Bay, on the overlying water column, and whether these effects have any significant impact on disruption of the summer pycnocline and reaeration of hypoxic bottom waters. Current velocities, turbulence, and several indicators of water quality were measured at the study site using an Acoustic Doppler Current Profiler and a Yellow Springs Instrument (YSI) Exo1 probe. These instruments were deployed for a 16-day period before reef balls were placed at the site. Following placement of the reef balls the instruments were deployed at the site for another 16 days. Comparison of these two data sets revealed a 5.62% decrease in time averaged velocity and a 28.26% increase in turbulence intensity following the placement of the reef balls. However, wind influence was detected to a depth of six meters. Considering only the portion of the water column not influenced by wind, there was a 7.49% decrease in time averaged velocity and 2.63% increase in turbulence intensity. Although, the increase in turbulence intensity in the lower water column was minimal, and dissolved oxygen concentrations at depth were not improved, the results have enough significance to conclude that further investigation is warranted.