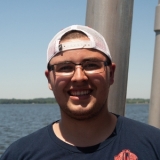 Impacts of Oxygen Depletion on Phosphorus Cycling in Rock Creek, an Aerated Tidal Tributary of the Patapsco River

Anne Arundel County, Maryland, operates a destratification system used to mitigate the effects of eutrophication-driven oxygen depletion in a small tidal tributary called Rock Creek. The system provided the opportunity for ecosystem-scale experimentation of manipulated oxygen levels by turning the system on or off, effectively inducing hypoxia and anoxia. Eutrophication can lead to overall declines in dissolved oxygen concentrations via the elevated consumption of oxygen during the decomposition of organic matter. There are known impacts of these oxygen reductions on phosphorus cycling by increasing the flux of phosphate from sediment into the water column. To determine the severity or duration of hypoxia needed to induce phosphate accumulation in the water column, both model simulations and field observations were used to quantify changes in phosphate fluxes from sediments and associated water column increases. Model predictions indicate that phosphate flux is sensitive to exposure to low oxygen, primarily severe hypoxia (0.5 mg/L). Model results paired with observed field data suggest that within 3–7 days of hypoxic conditions, a large signal of phosphate increase (500–900%) is experienced, likely due to elevated sediment-water flux. Future studies should include a focus on system recovery to increased phosphate flux resulting from hypoxia.