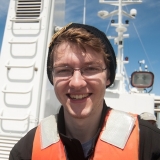 Golden tilefish are a demersal, stenothermic species that support a sizable fishery off the Southeast coast of the United States. The current stock assessment model heavily relies upon fishery-dependent data over fishery-independent data, and does not incorporate environmental effects on catchability. We analyzed longline survey data from the fishery-independent MARMAP (Marine Resources Monitoring Assessment and Prediction) program, catch data from the South Atlantic fishery, and publicly available climate data to determine the effects of a variety of environmental variables on catchability and abundance indices. Our results suggest the presence of sex-varying catchability and time-varying catchability, neither of which is accounted for in the current assessment. We also detected delayed declines in abundance indices following anomalously cold years, and identified a potential predictor of abundance in climate data describing the North Atlantic Oscillation. These tentative findings require more data to verify, but suggest that survival of juvenile tilefish is affected by low temperatures and that existing climate data could be used to predict future stock abundance. We recommend that future stock assessments for this species increase the weight of fishery-independent data relative to fishery-dependent data, and begin collecting sex-specific data to support stock assessments.