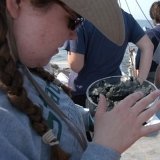 Linking Oysters and Seagrasses: Using Breakwaters as an Analogue to Oyster Reefs

The effect of breakwaters on adjacent seagrass habitats is currently unknown. The goal of this study was to quantify the effect of a breakwater on a seagrass habitat. Two deployments were performed at Bishops Head Point, MD in which significant wave height, total suspended solids (TSS), chlorophyll a, light attenuation and intensity at sediment surface, temperature, epiphytic loading, sediment organic matter and grain size, and nutrients were measured in a site protected by the breakwater and a nearby exposed. No significant difference was found between the sites for wave height, TSS (total and organic), light, chlorophyll a, nitrogen concentration, or phosphorus concentration. The data from the first deployment showed that the sheltered site was significantly warmer than the exposed site. During the first deployment more epiphytes were observed at the sheltered site than the exposed site. The same pattern was evident during the second deployment, but the difference was not longer significant. The sediments in the protected area had significantly higher percent organic matter than sediments found immediately outside the breakwater. Most of the sediment behind the breakwater was composed of small (<125 μm) grains. We concluded that the breakwater studied may have a negative effect on seagrass habitat.