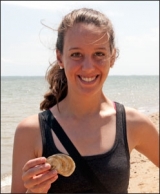 Eutrophication of the Chesapeake Bay has been a concern of environmentalists for several decades. A major source of nutrients that lead to eutrophication is from small streams and tributaries running throughout the Chesapeake Bay watershed. Studies show that degradation of water quality is prevalent in urbanized areas, and efforts are being made to help prevent pollution caused by decreased water quality from reaching the Bay. The purpose of this study was to examine the nutrient retention effectiveness of a stream restoration site in Anne Arundel County, Maryland during base- and storm-flow conditions. Concentrations of major anions (chloride (Cl-) and sulfate (SO42-)) and nutrients (nitrate (NO3-), total dissolved nitrogen (TDN), and total dissolved phosphorus (TDP)) in precipitation and the streamwater of both a partially suburban and a predominately forested catchment were determined. We found that nitrogen (N) and phosphorus (P) are being processed (uptake or loss) during base-flow periods but not during storm-flow periods. Additionally, anion and nutrient concentrations were generally higher in the urban catchment stream than in the forested catchment stream. The results of this study indicate that restoration sites can be effective at removing some N and P in streamwater thereby reducing nutrient loads to tributaries of the Chesapeake Bay.