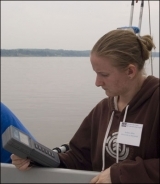 While many storms travel through the Chesapeake Bay region, only two hurricanes in recent history have resulted in major flooding of the surrounding area. By passing to the west of the Bay, Hurricanes Chesapeake-Potomac (1933) and Isabel (2003) created strong southeasterly winds around the estuary, propagating water up the Bay and flooding the estuarial coast. More frequently however, hurricane paths travel along the east coast, causing northerly winds to push waters out of the estuary. Thus, it appears that local wind forcing, which is highly dependent on a storm's path, is a leading factor in the estuarial response to passing storms.
The Regional Ocean Modeling System (ROMS) is used to model the barotropic sea level response of the Chesapeake Bay due to passing hurricanes. Hindcast simulations are conducted for Hurricanes Isabel (2003) and Floyd (1999): two storms with similar intensities but distinctive paths. The predictions are compared with observed sea level data for several stations along the length of the estuary. The model predicts the storm surge for both hurricanes with good accuracy; however, results clearly show high sensitivity in the storm surge predictions with changes in the inputted wind stress field. It is therefore determined that a highly accurate wind field is vital to obtain more accurate model results. The model predicts major flooding in the upper bay for Hurricane Isabel, and a sea-level depression for Hurricane Floyd at the same latitude, indicating that in both cases local wind forcing dominates the storm surge dynamics, although at differing degrees.