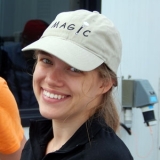 Marine dissolved organic matter (DOM) is one of the largest carbon reservoirs on Earth, but its composition, sources, and reactivity, all of which are essential in understanding the global carbon cycle, remain vague. The fraction of DOM that absorbs light in the ultraviolet (UV) and visible light spectrum is referred to as chromophoric DOM, or CDOM and is believed to be associated with the biorefractory component of DOM. In this study, fluorescence spectroscopy, specifically the excitation-emission matrix (EEM) technique, was used to characterize CDOM during prolonged photochemical degradation experiments. Solid-phase extraction was used to concentrate the DOM from six Sargasso Sea water samples collected from surface and various depths down to 4,537 m. Each sample was irradiated for 24 hours using a custom-built solar simulator system where absorbance and EEM spectra were recorded every 20 minutes using a flow through cell within the cuvette holder of an Aqualog fluorometer. Four distinct fluorescent peaks decreased while one increased during irradiation. This general trend was observed in samples from all depths. However, distinct differences of how quickly the fluorescence intensity changed for each peak area were obvious between depths, indicating distinct differences in the CDOM between depths. A parallel factor analysis (PARAFAC) model was also used to develop three PARAFAC components that reflect the variability of the fluorescence pattern during irradiation experiments and between samples. Observations of time-resolved changes in fluorescence and absorbance during solar simulated irradiation produced a more complete picture of the photo-reactivity of DOM with pronounced differences between the mixed layer and samples from greater depth.