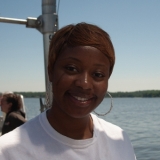 Mixotrophy is a nutrient acquisition method that combines photosynthesis and heterotrophy. Although mixotrophy is known to be prevalent throughout aquatic microbial ecosystems, mixotrophy has been poorly represented in current marine food web models. The ability to quantify carbon and nutrient acquisition associated with mixotrophy would be a major step forward in the attempt to better understand the behavior. Heterocapsa rotundata is a dinoflagellate species indigenous to the Chesapeake Bay that has been confirmed to exhibit mixotrophy and begins to graze on bacteria when light levels are low. Heterocapsa rotundata is a prominent species in Chesapeake Bay during the winter season. The objective of this study was to measure mixotrophic grazing in a culture of Heterocapsa rotundata isolated from the Choptank River, across a gradient of light levels. To measure ingestion rates, H. rotundata were allowed to feed on fluorescent microspheres for a brief incubation period. Ingestion rates were calculated as the rate of fluorescent beads engulfed by H. rotundata, as observed using fluorescence microscopy. The study demonstrated a significant negative relationship between light level and ingestion in indigenous Heterocapsa rotundata.