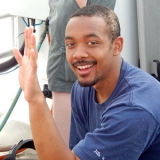 Consequences of Diversification Among Acartia tonsain the Chesapeake Bay

Acartia tonsa is an ecologically important copepod in many of the world's coastal bays, and is a common prey item for many commercially important fish in Chesapeake Bay. Despite its significance, little is known about A. tonsa genetic diversity within and between ocean ecosystems, and the possible ecological consequences of cryptic genetic diversity in this species. Previous studies have revealed two divergent, cryptic lineages of A. tonsa in Chesapeake Bay that sort spatially by salinity preference, but are also found to be sympatric at moderate salinities (6-12 ppt). The main objective of this study was to find out if these two clades (Fresh-F, and Salt-S) could mate and successfully produce hybrid offspring and any possible fitness consequences to these hybrid matings (hybrid breakdown, hybrid inviability, or hybrid sterility). A protocol was developed to isolate copepods early in development, identify their lineage, and make pair crosses with adults. Strict experimental controls were needed to ensure matings were only between the chosen paired individuals, and offspring fitness differences between within-lineage and hybrid crosses were recorded to measure consequences of hybridization. We found that hybrid (FxS) crosses produced the most eggs, followed by F lineage crosses, while S lineage crosses had the fewest, though there was no significant difference among the crosses (ANOVA P-value = 0.27). However, hatching success differed significantly between hybrid and parental crosses, with an average of just 3.75% for hybrids versus more than 60% in the parental crosses, and those hybrid individuals that did hatch, died within two days as nauplii larvae. Our results show that the two lineages of A. tonsain the Chesapeake Bay show hybrid inviability as they were able to produce hybrid offspring, but these offspring never made it beyond early development. Overall, our results confirm previous genetic data that suggested long term reproductive isolation between the clades, and suggest that where these lineages co-occur, there may be limitations to population productivity due to poor hybrid fitness, though this will need to be explored further. This experiment marks the first successful, directed crosses in Acartia tonsa in the literature, and the developed crossing protocol will be useful for future breeding studies in this species.