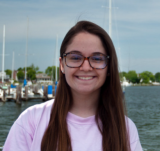 Anthropogenic climate change may alter the variability of Earth’s climate patterns during the 21st century in ways we are only beginning to understand. By analyzing past conditions through proxies, we can understand the climatic system and make better models to predict climate variability under future warming trends. We measured strontium to calcium ratios in approximately monthly samples of a Pseudodiploria strigosa coral to reconstruct sea surface temperatures (SST) at Anegada, British Virgin Islands, in the northeastern Caribbean. The coral was uranium-series dated to the 11th century, and grew during approximately 1005-1049 C.E. with an uncertainty of 2.3 years. The data revealed seasonal cycles over the lifetime of the coral, allowing us to create a seasonal climatology from 22.7 years of data. Comparing the seasonal climatology of Medieval coral 13AN4 with three modern corals measured by Xu et al. 2015, we found the Sr/Ca values of the fossil coral to be substantially higher than the modern corals, indicating cooler temperatures relative to modern at the time of coral growth. These results are consistent with previous work indicating that the climate system may have been more often in a positive North Atlantic Oscillation (NAO) state and an El Nino Southern Oscillation- cool phase (La Nina- like) during the Medieval period.