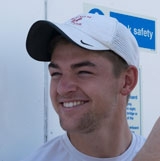 This study examines the role of vegetation composition on MeHg production in the Kirkpatrick Marsh, which is located at the head of the Rhode River. The Kirkpatrick Marsh has a diverse plant community but the community tends to be distributed in patchy assemblages. This study assesses whether or not the distinct plant community assemblages influence the biogeochemical environment around the roots and specifically the quality of dissolved organic matter (DOM), which has been shown to influence mercury cycling on larger scales. In order to accomplish this, we collected 33 pore water samples from 11 plots along two transect lines, covering the four plant communities that dominate in those specific areas in the marsh. Although vegetation removal and vegetation root experiments have been conducted, pore water species-specific vegetation studies have not been conducted in the Kirkpatrick Marsh. We collected pore water samples for MeHg, T-Hg, methane, chloride, sulfate, sulfide, CDOM (Colored Dissolved Organic Matter), and DOC (Dissolved Organic Carbon) on two dates: transect 1(TR1 6/23/2016), transect 2 (TR2 6/29/2016). Our results suggested that Phragmites australis was responsible for contributing higher quality CDOM, compared to the other plant species we examined in the marsh. Additionally, no evidence was discovered to suggest that any plant species was contributing a higher quantity of DOC to the marsh. Total mercury concentrations were significantly higher in plots containing Phragmites. As a result, we suggest that measures need to be instilled to monitor the spread of the invasive species, Phragmites australis, as it has the potential to take in inorganic and elemental mercury impacting the local pore water thereby maybe a growing source of mercury to the Chesapeake Bay. While MeHg concentrations were not statistically significantly higher than other vegetation types, on the date sampled, this was driven by the site closest to the land suggesting location was somehow altering MeHg accumulation in the pore water at this site. Further study is needed as the Phragmites community is the most biogeochemicaly favorable for methylation whose expansion could also greatly influence MeHg export.

Rosera, T.*, A. Heyes, and M. Gonsior. 2017. Assessing the plant community controls on carbon and how that contributes to methylmercury production in the pore waters of a Chesapeake Bay tidal marsh. ASLO Aquatic Sciences Meeting, Honolulu, Hawaii.